Stack Overflow for Teams is a private, secure spot for you and your coworkers to find and share information.

R and probability noob here. I'm looking to create a histogram that shows the distribution of how many attempts it took to return a heads, repeated over 1000+ simulated runs on the equivalent of an unfairly weighted coin (0.1 heads, 0.9 tails).

From my understanding, this is not a geometric distribution or binomial distribution (but might make use of either of these to create the simulated results).

The real-world (ish) scenario I am looking to model this for is a speedrun of the game Zelda: Ocarina of Time. One of the goals in this speedrun is to obtain an item from a character that has a 1 in 10 chance of giving the player the item each attempt. As such, the player stops attempting once they receive the item (which they have a 1/10 chance of receiving each attempt). Every run, runners/viewers will keep track of how many attempts it took to receive the item during that run, as this affects the time it takes the runner to complete the game.

This is an example of what I'm looking to create: 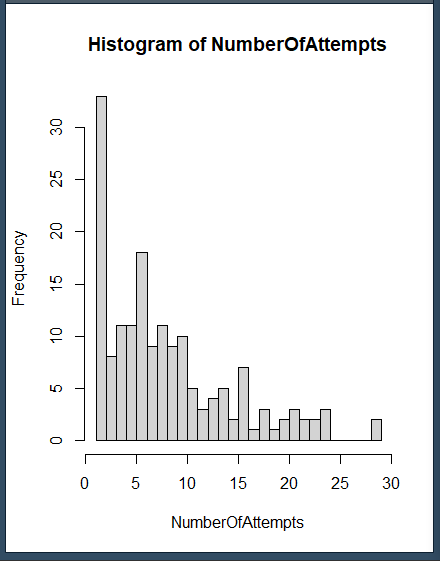 (though with more detailed labels on the x axis if possible). In this, I manually flipped a virtual coin with a 1/10 chance of heads over and over. Once I got a successful result I recorded how many attempts it took into a vector in R and then repeated about 100 times - I then mapped this vector onto a histogram to visualise what the distribution would look like for the usual amount of attempts it will take to get a successful result - basically, i'd like to automate this simulation instead of me having to manually flip the virtual unfair coin, write down how many attempts it took before heads, and then enter it into R myself).

ConorConor
2322 bronze badges
New contributor
Conor is a new contributor to this site. Take care in asking for clarification, commenting, and answering. Check out our Code of Conduct.
add a comment  |

I'm not sure if this is quite what you're looking for, but if you create a function for your manual coin flipping, you can just use replicate() to call it many times: 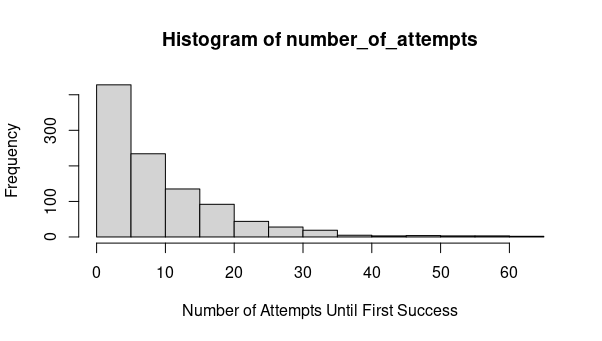 As I alluded to in my comment though, I'm not sure why you think the geometric distribution is inappropriate. It "is used for modeling the number of failures until the first success" (from the Wikipedia on it). So, we can just sample from it and add one; the approaches are equivalent, but this will be faster when your number of samples is high: 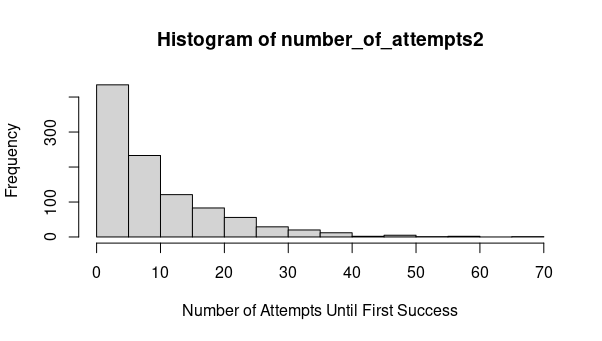 I would use the 'rle' function since you can make a lot of simulations in a short period of time. Use this to count the run of tails before a head: > n <- 1e6

and you get a chart like this: Histograph of runs

I would tabulate the cumsum. 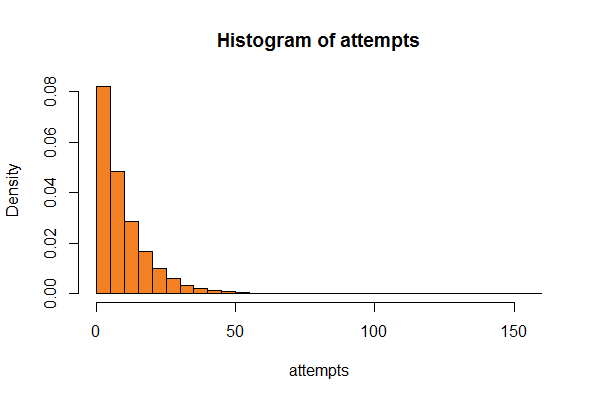 Not the answer you're looking for? Browse other questions tagged r simulation probability or ask your own question.

The Overflow Blog
Featured on Meta

13
Generate multiple permutations of vector with non-repeating elements
1
Generating predictive simulations from a multilevel model with random intercepts
4
Coin toss simulation/game in Java
0
Plotting two sets of data on one histogram
2
R: Using fitdistrplus to fit curve over histogram of discrete data
0
3d histogram of coin flips results in R
1
Self-Correcting Probability Distribution - Maintain randomness, while gravitating each outcome's frequency towards its probability
1
Is there a way to determine a precise fraction from a large sample monte carlo simulation using R?
0
Infinite loop in coin-flipping game